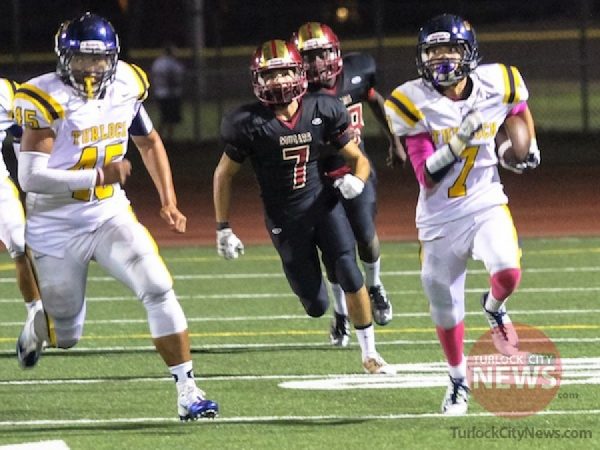 The Turlock High Bulldogs (3-3, 1-0) played their first Central California Conference game of the season, and their last travel road game of the season tonight at the Golden Valley High Cougars, where they ran away with a 50-29 blowout win in Merced.

Quarterback Bubba Moreno didn’t play a flawless game, but it didn’t really matter because the Bulldogs were simply the better, more physical team. However, that’s not to say the game was never in doubt.

Early on the Bulldogs leaped out to a 14-0 lead when Moreno hit junior tight end Allen “Bear” Padilla to open the game on the Bulldogs’ first possession. To close the first quarter sophomore running back Danny Velasquez started a 57-yard drive with a 28-yard run and capped off the drive with a 6-yard TD run.

But the Cougars scored on their ensuing possession to make the score 14-7 with 10:33 left in the half.

The Bulldogs answered back when Moreno connected to senior receiver Jeffery Hines on a 50-yard TD pass, 21-7 Turlock lead.

After the Bulldogs defense forced a Golden Valley turnover on downs it appeared as if the Bulldogs would be putting the game away fairly early, but on a first-and-10 from the Cougars 34-yard line, Moreno turned the ball over on an option pitch where he pitched the ball right into the waiting arms of a Cougar linebacker, who returned the ball 70 yards for a TD to make the score 21-15 with 2:21 left in the first half.

However, that would be as close as Golden Valley ever got in the game.

The Bulldogs struck again when Moreno completed a 64-yard pass to Velasquez to later set up a Moreno 4-yard TD run with 41 seconds left in the first half to make the score 29-15.

Then, the Bulldogs looked to put the final nail in the coffin with 29 seconds left after senior defensive end Zevey Lopez recovered a Golden Valley fumble at midfield. Moreno threw an impressive 60-yard pass that fell incomplete and a hook-and-ladder play to Hines and running back Andrew Lopez came up just short.

In the third quarter, the Bulldogs defense came up huge recovering two Golden Valley fumbles, leading to a 18-yard TD run up the middle for Lopez.

On Golden Valley’s ensuing offensive possession Hines came up big on the defensive side of the ball with an interception returned 30 yards for a TD to close the third quarter and make the score 43-15.

In the fourth quarter some of the less often featured Bulldogs saw some playing time including junior running backs Brandon Booz and Shawn Gonzales, and senior running back Demetrius Brown, who scored the Bulldogs final touchdown with just over 5 minutes left.

“I’m really proud of how the guys played today. They played football the way it is meant to be played — as a team,” said Bulldogs Head Coach James Peterson. “Tonight we are going to celebrate this win, but we still have some things we need to work on.”

Following the game Peterson told his players that in CCC play they are undefeated and he went on to explain to them how hard wins are to come by in what is widely regarded as one of the toughest leagues in the Sac-Joaquin section.

Next week the Bulldogs will take on the Buhach Colony Thunder in Turlock at 7:30 p.m. The Thunder, lost to Pitman and fell to 3-3 overall and 0-1 in CCC play, have lost two straight games. Undoubtedly they will look to drop the hammer on the Bulldogs.

But Peterson is a man of preparation and commitment. His players will be back at THS Saturday morning early in the a.m. hours to watch film of the Golden Valley game and begin their preparation for Buhach.