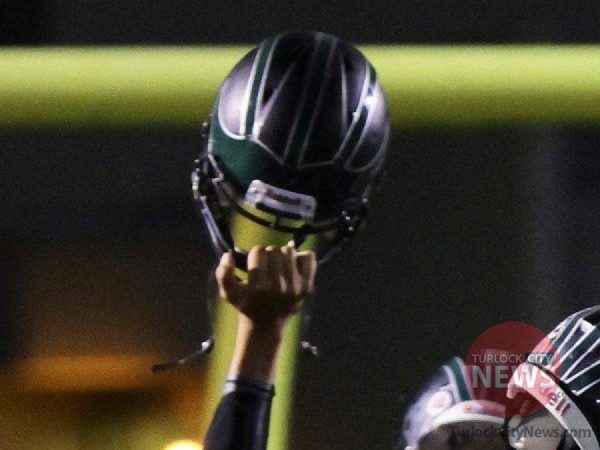 The Pitman High School Pride (5-0, 1-0) remains undefeated after rolling through the Buhach Colony Thunder (3-3, 0-1) 34-13 in the first Central California Conference league game of the season.

The Pride, who are only allowing 14 points per game over their last four games, continued their strong defensive play, containing the Thunder’s high power offensive on Friday night.

Buchach was able to strike first with a field goal with 3:04 left in the first quarter, but the Pride defense deserved some credit.

The Pride coughed up the ball on a third-and-long, giving the Thunder great field position on the drive. However, a big sack by defensive lineman Ryan Boutelle helped limit the Thunder to only three points.

Down by three, it didn’t take long for the Pride to jump in front of the Thunder.

On the first play of the ensuing drive, Pride running back Ryan Yniquez hit a wide open hole and went untouched for a 65-yard touchdown and the first Pride points of the game.

The first quarter ended with the Pride up 7-3 and they never looked back.

Buhach was able to put three more on the board with a 27-yard field goal to bring the game within one, but Pitman kept hammering the ball and fullback Blake McBay found the endzone on a 4-yard rush with 7:20 remaining in the half. 14-6 Pitman.

Once again, Yniquez found paydirt on a 60-yard burst through the middle of the Buhach defense — giving the Pride a 21-6 lead that they took into halftime.

The Thunder attempted to crawl back into the game and capped off the opening drive of the second half with a 10-yard bruising touchdown run by running back Justin Stefani. 21-13 Pride.

Buhach was within one score, but the Pride quickly put the game out of reach on a 54-yard touchdown pass from quarterback Matt Carrigg to tight end Micah Millentree. The Pride lead 27-13 with 6:40 left in the third quarter.

The Thunder couldn’t move the ball against the Pride defense in the second half and Pitman cruised to victory.

McBay scored his second touchdown of the night on a 1-yard run up the middle in the fourth quarter.

Pitman will now travel to Merced to take on the Merced High School Bears (4-2, 1-0) at Golden Valley High School on Oct. 17 as league play continues.