Unemployment Down in Stanislaus County, According to Report 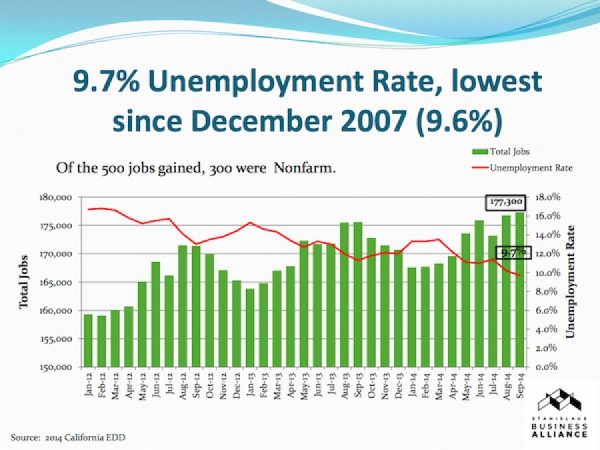 The Modesto Chamber of Commerce held their annual State of the Region event last week with more than 350 individuals present to address the issue of economic development in Stanislaus County.

According to the September report from the U.S. Department of Labor, the unemployment rate in Stanislaus County now stands at 9.7 percent, the lowest since December 2007. While still higher than the 5.9 percent national average reported by the Bureau of Labor Statistics, the number indicates signs of improvement with 248,000 new jobs created nationally during the period.

Despite recent announcements of job layoffs in the County, David White, CEO of Stanislaus Business Alliance, remained optimistic that with the improving local economy, and help of Alliance Worknet, a local resource for jobseekers and businesses, chances are much better for jobseekers to find employment in a reasonable amount of time.

“We won't be satisfied until every Stanislaus County resident who wants to work has a meaningful, living wage job,” said White of the County’s September jobs report.

He stated the need to address and improve County employer’s specific areas of concern, namely a skilled workforce, better infrastructure, the condition of our streets and roads, and regulation.

The Stanislaus Business Alliance reported in their 2014 Synchronist Survey that two in three local companies are in growth phases, 80 percent have introduced new products in the past five years, and 75 percent anticipate adding in the next two years. Additionally, 96 percent of companies reported increasing or stable sales, and 78 percent plan to expand in the next three years.

Denham spoke on the County’s future and the need to create opportunities locally, particularly so future generations will remain in the area. He noted the need for a government that does not hinder job creation, in addition to stable policies and sensible fiscal spending.

“We cannot dictate the future of our economy, but we can unleash the natural dynamism and creativity of Central Valley entrepreneurs, farmers, students and community leaders to build a better future,” said Denham.