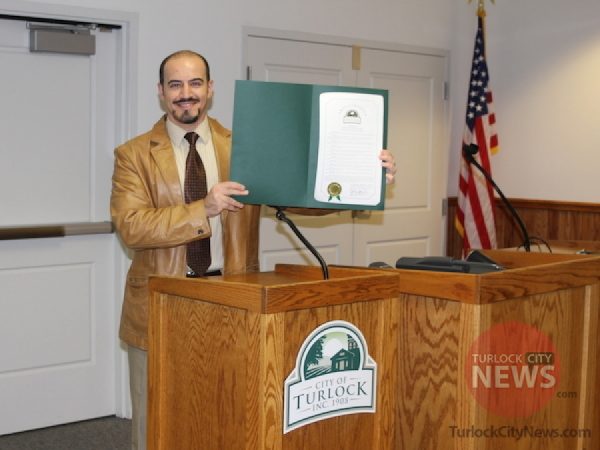 Donald Babadalir, former City Council candidate, requested the Turlock City Council make a proclamation during the Oct. 28 Council Meeting, to which he was presented Nov. 18 with a signed proclamation from Mayor John Lazar in support of Assyrian and Iraqi Christians suffering persecution in the Middle East.

The wording, as submitted by Babadalir, noted the Assyrian community as an integral part of the Turlock mosaic. The proclamation explains the local Assyrian community, through churches, youth, cultural and philanthropic organizations as an extraordinary contributing factor to all facets of life in the City and community.

After receiving the proclamation from Lazar, Babadalir commented on its importance.

“The reason why this was important is because the Assyrian community over here still has connections with relatives and family members back home in Iraq and Syria,” said Babadalir. “It’s inevitable that these occurrences that happened in Iraq and Syria are going to result in these individuals being forced to flee. Because of their connections with the community here, their family members here, it is expected that some of them are going to be arriving here in Turlock, inevitably, and that does of course affect our community…and that’s why it’s important.”

“It’s also important because of the fact that if genocide is not recognized in one occurrence, then we cannot recognize it in its entirety. And it’s very important by recognizing this, we recognize we recognize that there is injustice occurring all over the world and we can take steps in order to correct it.”

Babadalir took to Facebook to further speak on the signed proclamation.

He noted that several cities with large Assyrians communities have passed similar resolutions, and have released proclamations condemning the ongoing genocide.

“Since the events of June 9th, 2014 took place in Iraq, over 500,000 Assyrian Christians have been forced to flee their homes and are now displaced,” said Babadalir on Facebook.

On June 9, extremist militants of the so-called Islamic State (ISIS) seized the airport in Mosul, Iraq’s second largest city, Additionally, the militants seized the Governor’s office, television stations, and freed nearly 1,000 prisoners. As a result, no Iraqi government presence in the area was visible.

ISIS has grown to be the most dangerous and radical terror group, particularly with the massive seizure in Mosul. Terrorist group Al Qaeda, of which the ISIS faction originally stemmed from, has even disassociated with it.

Babadalir continued on those forced to flee from Iraq.

“They are living in impoverished conditions, in tents or in churches in areas far away from their former homes,” said Babadalir. “Many were also killed in the process and those who stayed in Mosul were forced to convert to Islam while women were sold in sex trade markets. This is no different than what happened during WWI.”

“I condemn any and all genocides and I want to be clear that I will stand in solidarity with others who are being persecuted and massacred. It is 2014. Such savagery has no place in the world.”