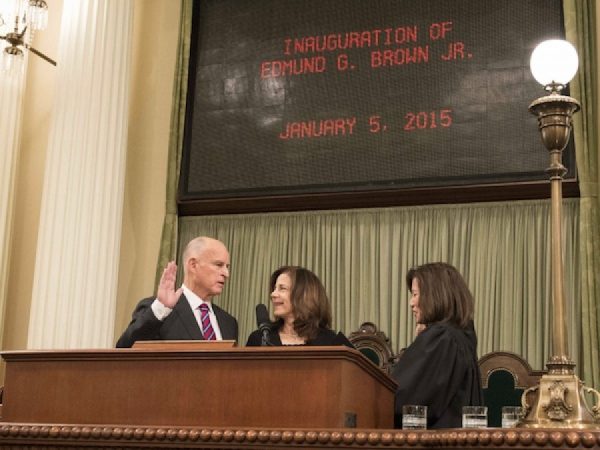 Governor Jerry Brown took the oath of office Jan. 5 as Governor of California, delivering his inaugural address in the State Assembly Chamber, a required annual report to the Legislature.

Brown recollected on the inauguration of his father 40 years ago as Governor 34 of the State of California.

Brown noted the economic times that California saw under his first term and the recovery it has seen since. Brown mentioned the State’s $26 billion of debt and 12.1 percent unemployment rate when he took office.

“Now, the state budget, after a decade of fiscal turbulence, is finally balanced – more precariously than I would like – but balanced,” said Brown. “In 2011, we were handed a mess and through solid, steady work, we turned it around. While we have not reached the Promised Land, we have much to be proud of.”

“California has seen more than 1.3 million new jobs created in just four years and the unemployment rate has dropped to 7.2 percent. Thanks goes to the Legislature for cutting spending, the economy for recovering and the people for voting for temporary taxes.”

In some states throughout the country, November 2014 unemployment rates are as lower than 3 percent with seasonal adjustments according to the Bureau of Labor and Statistics with states like North Dakota experiencing a 2.7 percent unemployment rate, and Utah with 3.6 percent, for example.

States with comparatively large populations to California, like Texas and Florida are experiencing unemployment rates of 4.9 percent and 5.8 percent, respectively. California is the most populous state in the nation with the eighth largest economy in the world according to statistics from 2014.

“We also have the people to thank for Propositions 1 and 2, which save water and money and prepare us for an uncertain future,” said Brown.

Proposition 1 for funding water quality, supply, treatment and storage, was put on the ballot by the Legislature, and passed with 67.1 percent in favor; in Stanislaus County, votes reflected the trend with 64.5 percent voting in favor of the initiative according to final results.

Additionally, Proposition 2, the State Budget Stabilization Account, as put on the Ballot by the Legislature passed with 69.1 percent of voters support; in Stanislaus County, 66.5 percent voted in its favor, according to final results.

With its passage, the annual transfer of State general fund revenues to the budget stabilization account will be required, and half of revenues are required to be used for the repayment of State debts, limiting the use of remaining funds to emergencies or budget deficits.

The rationale is that the State will save long-term from faster payment of existing debts. There would be different levels of State budget reserves, depending on the economy and decisions made by elected officials. There will also be smaller local reserves for some school districts.

“These are measures that nearly every Democrat and Republican voted to put on the ballot and nearly 70 percent of voters ultimately approved. And I'm proud to report that as a result, by the end of the year, we will be investing in long overdue water projects and saving $2.8 billion in the state's new constitutionally protected Rainy Day Fund.”

“And we're not stopping there. Soon we will make the last payment on the $15 billion of borrowing made to cover budget deficits dating back to 2002,” said Brown.

“We will also repay a billion dollars borrowed from schools and community colleges and another $533 million owed to local governments.”

“We are leaders in renewable energy and efficiency; we have extended health care to millions; we are transforming our educational and criminal justice systems; we are building the nation's only high-speed rail system; we raised the minimum wage; we are confronting the drought and longer-term water issues; and last, but not least, we have enacted real protections for our hardworking immigrants, including the issuance of long-awaited driver's licenses.”

“The financial promises we have already made must be confronted honestly so that they are properly funded. The health of our state depends on it,” said Brown.

He spoke on the need for education, the various elements relating to funding and past issues the State has faced regarding the matter like inequalities in school district funding and the barrier it can cause for low-income families.

“Educating the next generation is fundamental to our collective well-being,” said Brown.

Brown mentioned the new Local Control Funding Formula system of school funding where state funds are directed to school districts based on student needs. Districts with more students from foster care, low-income families and non-English-speaking parents will receive more funding due to the measure. State control is reduced, lending to local flexibility in funding, according to Brown.