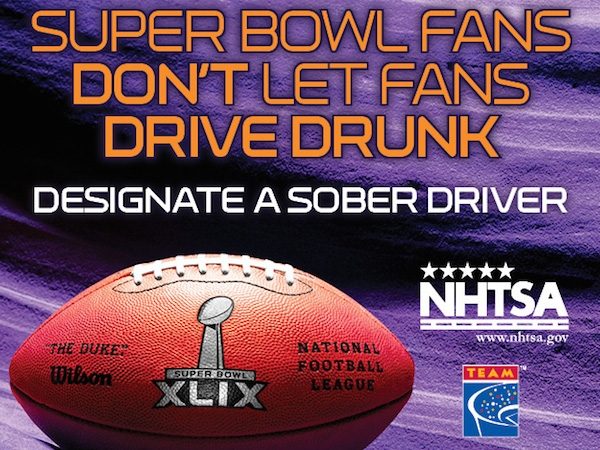 The Super Bowl, which will take place Sunday, Feb. 1, is one of the most celebrated sporting events in the world, but the California Highway Patrol are encouraging fans make plans ahead to prevent drunk driving.

“Drunk driving is an act that is completely preventable,” said CHP Commissioner Joe Farrow. “All it takes is a little bit of planning to prevent a tragedy. We want Californians to remember that drinking and getting behind the wheel is a choice. If you choose to drink, do not drive, it is that simple.”

According to the CHP’s Statewide Integrated Traffic Records System, alcohol was involved in nearly 225 collisions on Super Bowl Sunday 2012 — the most recent year that finalized collision data is available. Out of the 225 collisions, eight resulted in death and 79 resulted in injuries throughout California.

CHP will be working with law enforcement agencies across the state, as well as in Stanislaus County, to discourage the public from driving under the influence and attempt to remove impaired drivers before they injure or kill themselves or others. On Super Bowl Sunday 2012, CHP arrested 422 drivers for DUI, according to the CHP.

The public is also encouraged to be a team player by calling 9-1-1 if they suspect a drunk driver. Callers should be prepared to provide the vehicle’s description, license plate number, location and direction of travel.

To help limit impaired drivers on the roadways, AAA is offering one-way free tows from 6 p.m. on Sunday to 6 a.m. on Monday. You do not need to be a AAA member to take advantage of the Tipsy Tow program.