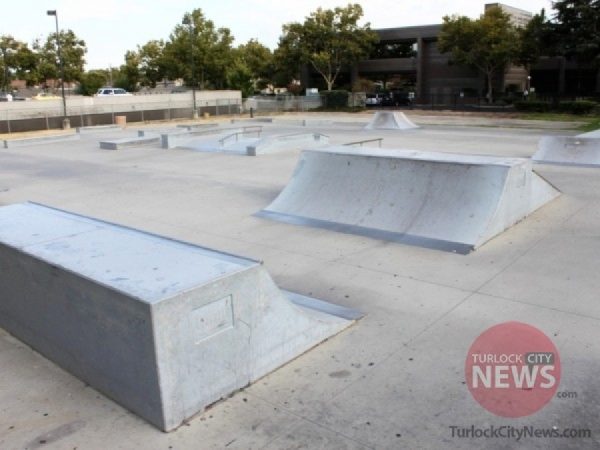 The City of Turlock hopes to have the new skate park moved and open by the end of August, according to an update given at Wednesday’s Parks, Arts and Recreation Commission (PARC) meeting.

Turlock Parks, Recreation and Public Facilities Superintendent Erik Schulze gave PARC an update on the current status of the skate park and had some positive news.

Brandon Koch Memorial Skate Park, currently located at 250 Starr Ave., was approved to be moved to Donnelly Park in July of 2013.

The park was to be me moved as part of a sale of the War Memorial and surrounding property, which includes the skate park, to the Turlock Irrigation District. That deal has not been finalized, but it appears to be getting closer to becoming a reality.

Per the deal, the City of Turlock was going to have to move the skate park and eventually chose Donnelly Park as the site.

Included in the new park will be several elements from the current Brandon Koch Memorial Skate Park, such as rails, boxes, etc.; the halfpipes and similar elements will not be moved, as they were laid in place, said Schulze.

Construction of the new park would begin before the expiration of the contract, with the final elements from the old skate park being the final pieces. The move would take place after Aug. 15, with hopes of the new skate park opening that same month.

“Our hope is that we’ll have a seamless move,” said Schulze at Wednesday’s meeting.

Last year, City staff expected that Turlock would be without a skate park for a two month period between August 2015 and February 2016, however now Schulze there will only be a “minimal closure,” if any.

The new skate park, as part of the approval to move, will remain being called the Brandon Koch Memorial Skate Park, named in memory of local skater Brandon Koch, who lost his battle with adrenocortical cancer at the age of 26 in April of 2012. Koch was known as a leader and friend at the skate park; he helped young skaters learn to skateboard and protect them from bullies at the park.

While the new park is expected to be open much earlier than previously thought, there’s still a long way to go before it’s all done.

The City of Turlock still needs a design company to create the design of the park. The design company, once chosen, would likely hold public meetings to hear the public’s opinion on the design. Once a design is chosen and approved by a committee, which was created at the time of the originally public hearing for the move, the City of Turlock would take construction bids.

Despite the work ahead, it appears as though Turlock skateboarders will be skating a new park before the end of summer.