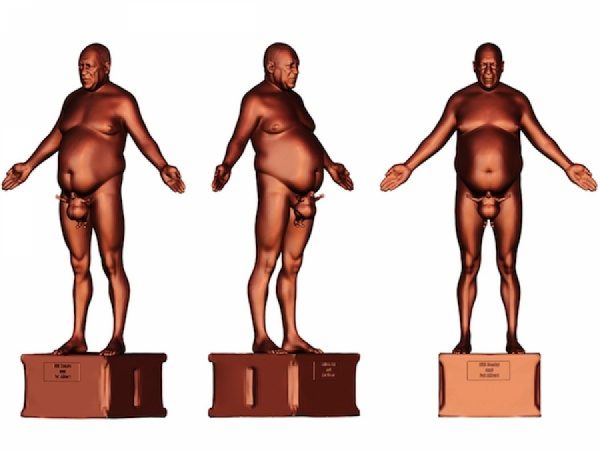 The project, “Fat Albert Cries for Dr. Huxtable,” was proposed by Rodman Edwards, 15, who lives in Turlock. Images of the project were revealed last month at the Cory Allen Contemporary Art Gallery in St. Petersburg, Florida.

The statue features a nude, aged, and out of shape Cosby, with a miniature crying Fat Albert, a character created by Cosby, covering the area where Cosby’s genitals would be.

Edwards would like to create the sculpture to replace the busts of Cosby currently on display at the Academy of Television Arts and Sciences Halls of Fame in North Hollywood and in Orlando.

“As a fan, I think I just felt compelled to depict two of Bill Cosby’s creations at odds with each other, because Bill Cosby seems to be at odds with what I always thought Dr. Huxtable stood for,” said Edwards in a press release.

Thirty-three women have alleged that Cosby assaulted them between 1965 and 2008, allegations that Cosby has previously denied.

Cosby’s controversy struck Turlock when he performed to a sold out crowd at the Turlock Community Theater on Jan. 18, despite some other dates being cancelled due to the allegations.

“Hall of fame statues should not be exempt from reevaluation. Sometimes they need to be removed or replaced,” said the artist’s spokesperson Cory Allen in a press release. “Joe Paterno’s statue was taken down following the 2011 Penn State sex abuse scandal. Maybe the TV Hall of Fame and Disney should take note.”

Edwards, the son of Daniel Edwards, an experienced sculptor and a professor at California State University, Stanislaus, has had previous successes, including making a large clay mask of Hillary Clinton used for an anti-Keystone Pipeline rally in San Francisco.

Since the release of the photos, the project has received national coverage from the Huffington Post, Washington Times, and Vice, as well as many other publications.