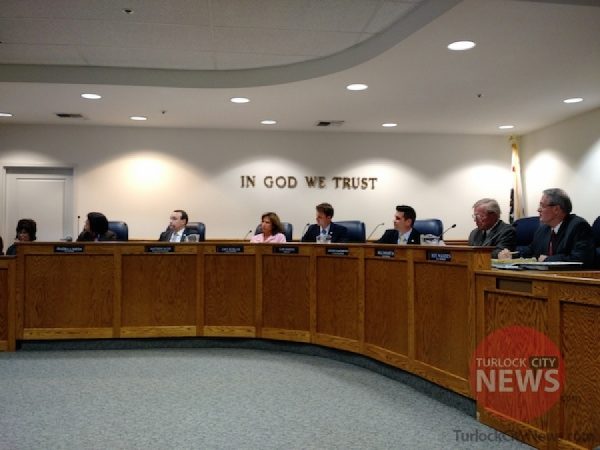 Turlock City Council has approved a two-year budget for the first time in the history of the City of Turlock.

Mayor Gary Soiseth, whose recommended budgets were approved 4-1, proposed the use of reserve funds to pay off large debts of the City of Turlock, in turn freeing up some money for services, according to Soiseth.

The City of Turlock, per the approved budgets, will pay off approximately $5.5 million in outstanding debt to the Turlock Police and Fire Departments’ Public Employee’s Retirement System (PERS). The City will use $2.4 million from the sale of property to Turlock Irrigation District and the remaining from the general fund reserves.

“The general fund reserve will dip down below that $6.5 [million] hard reserve threshold, but again, it will go back up to about $7.9 roughly million after the $2.4 million sale goes through,” said Soiseth.

Over 10 years, the debt pay off will create a savings of around $1.9 million. However, paying the debt now will require the reserve to drop below the $6.5 million “hard reserve,” previously set by Council while they wait for the property sale to be finalized in August. Council approved the temporary drop in the hard reserve along with the approved budget.

“This proposal, option one, is looking at the general fund reserve and looking to strategically use it to take out this toxic debt,” said Soiseth.

Since the City of Turlock is using reserve funds to pay off outstanding debt, the scheduled $615,367 payment for 2015-16 will not come out of the general fund and Soiseth is proposing those funds be used for additional services.

One area seeing additional services is public safety, which uses a significant majority of the general fund.

Per the approved budget, the Turlock Police Department will get a new crime analyst, as well as funding for equipment for the street crimes unit.

The Turlock Fire Department will also be getting some new staffing, with the additional of four new firefighters.

However, Council will also be looking into the possibility of a K-9 unit in July and August, as some items other councilmembers had suggested didn’t make the approved budget.

"One thing that I would like to point out — the reason I'm willing now to second [the motion] — is because you did mention that we're going to be bring items back for discussion including the addition of a K-9 unit,” said Jacob.

Other additions to the status quo budget include dedicating the $50,000 set aside for pothole repairs to a “crack seal” contract, which will hopefully extend the life of Turlock roads. There is however no new money dedicated to road repairs in either the 2015-16 or 2016-17 budgets.

While no new money for roads, there is an additional $10,000 for a tree maintenance program in the City of Turlock. On June 23, Turlock City Council will create an ad hoc committee to look at what changes need to be made to the sidewalk and tree maintenance policy in Turlock.

The Mayor’s proposed budget was largely supported by Council, however Councilmember Steven Nascimento had some key issues with it that led to his lone dissenting vote.

“I don’t think we find that much disagreement, just, I think, the majority of our disagreement comes just sort of the fear of the unknown,” said Nascimento. “…I think this council has been served well by prior councils being very frugal and leaving some reserve to be able to do some of these things and I want to return that favor to future councils.

“I have concerns with us spending out of our reserves and taking on these spending initiatives that will burden the general fund going forward."

Nascimento, who presented his budget before the June 9 meeting, suggested the City of Turlock pay off a portion of the outstanding debt with the sale of property of TID, but was not in favor of dipping into the reserves.

To alleviate some of Nascimento’s — and general Council’s — concerns, Soiseth said Council will be looking into a plan to bring the reserve back up after paying off the debt.