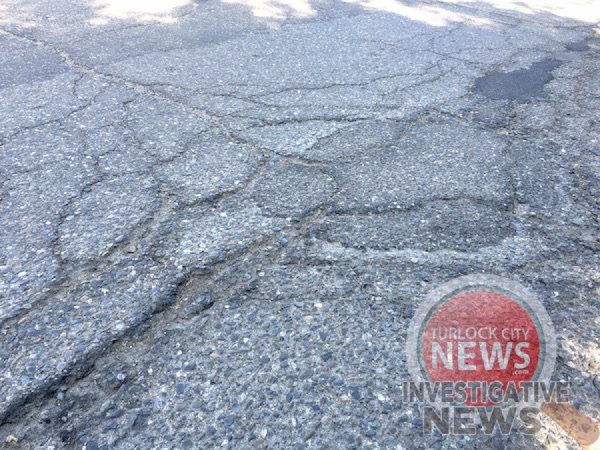 In 2014, a road tax was being pushed by some local politicians, such as Councilman Steven Nascimento. The Turlock tax hike proposal became known as Measure B on the November 2014 ballot.

Before that measure went out to the voters, Turlock City Council discussed spending $50,000 on roads, out of a $32.4 million General Fund.

Councilmember Steven Nascimento said that it was time for the City of Turlock to spend some of its own money on the roads.

In 2015, Turlock Mayor Gary Soiseth determined that a crack seal contract would be more cost effective for Turlock roads than adding a pothole repair team, after discussing the options with staff.

“While we have our pothole crews going out and doing their jobs, we didn’t have that crack sealing component,” said Director of Parks, Recreation and Facilities Allison Van Guilder. “So what was happening is you might have a crew go in and fill a bunch of potholes, but with that first rain all of that work is undone because the water comes in through the cracks."

“It’s conservative, we know,” said Van Guilder. “It’s a step in the right direction though, we believe, and works to compliment what we’re already doing in terms of our pothole crews."

It is unknown at this time which roads exactly would receive the treatment, but it may divide the city into zones, with a different zone being treated each year.

Soiseth said the program is only a pilot program and depending on the effectiveness of the program during the first year, if it is approved, Turlock City Council could continue the program in future years and continue to increases funding.

At the June 28, 2016, Turlock City Council meeting, Councilwoman Amy Bublak requested staff to look into more funding for roads and that regardless of a road tax outcome, which she has not supported this year or in 2014, that citizens know that the City of Turlock is going to start prioritizing road repair, and show it with funding.

Well… This request had led TurlockCityNews.com to uncover some issues and lack of answers regarding the actual spending of the allocated $50,000 that Councilman Nascimento advocated for, and specifically stated, with the intention of showing voters that the City is putting skin in the game and that voters should pass the road tax hike.

After the tax didn’t pass, now it looks like the money wasn’t spent afterall.

Nascimento was also on the Measure B road tax Citizens for Yes on Measure B steering committee.

And then, on top of all this, the City of Turlock sent out utility bills that included a Measure B campaign mailer directing citizens to the website that campaigned for the passage of Measure B.

The campaign mailer through the City government billing is still currently being investigated by Fair Political Practices Commission.

TurlockCityNews.com will have answers as soon as we can get them from a government City Staff that is not being very transparent or responsible with following clear Council policy, and neck deep in political agendas.