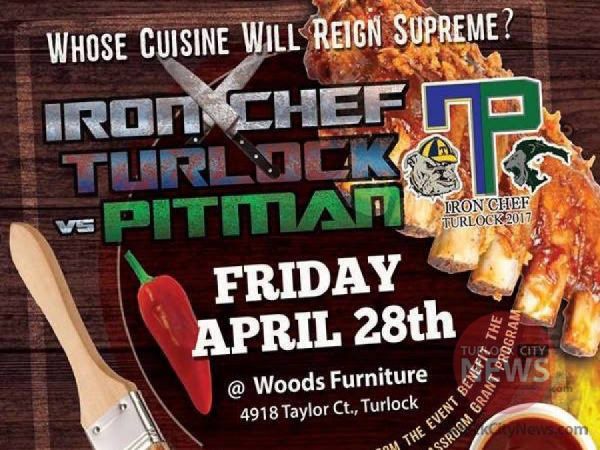 The rivalry between the Turlock High School Bulldogs and Pitman High School Pride will be heating up as the culinary action spills to the outside for a battle of barbeque in this year’s Iron Chef competition.

Pride and Bulldogs will have one hour to prepare three meals for five judges in the 4th edition of the annual contest. However, as with previous years, the challenge in Turlock’s iteration of Iron Chef, an event and fundraiser put on by Turlock Education Foundation, continues to evolve.

While past years challenged students with Mexican and Indian cuisine respectively, this year, the Pride and Bulldogs will be embroiled in a clash over barbeque.

Whether it be the steaks seared on the bbq or vegetables roasted over open flames, the challenge for this year’s culinary students will be to find a way to use the barbeque to cook their food for an appetizer, main course, and dessert.

“I’ve wanted an outdoor bbq event for quite a while, so I’m excited for that,” said TEF Board member and coordinator Barney Gordon.

In many ways, the Iron Chef Turlock competition is doing its best to reflect the television show, emphasizing a dedicated 1 hour time limit, cooking themes, and panel of judges.

“We try to parallel the show as much as we can. We don’t surprise them with a surprise ingredient or anything like that, but we do have a theme that they either have to use this one ingredient but we tell them in advance what that ingredient is,” said Gordon.

“We wanted to change it up and do an outdoor theme, so this year’s going to be out at Wood’s Furniture and their front parking lot.”

Four students from the culinary program at the respective high schools are selected for the showdown and are joined with the site principal. The culinary teachers will sit out the competition, maintaining a more supervisory role over their team in the competition.

Students have been preparing for the annual competition for some time, often practicing their meals well in advance of the competition, according to Gordon.

“It’s always fun to see the students compete. The kids really get into it. They take it very seriously and you can tell the food that they make is fabulous looking and fabulous tasting.”

While culinary bravado and bragging rights are at stake for the two teams, the competition also brings the chance to even the score between the Bulldogs and Pride, as the Bulldogs currently trail the Pride in victories (1 to 2), and bring the Iron Chef trophy to THS for a year or offer the chance for the Pride to extend their lead.

Tickets will be on sale for the event through the weekend at $40 per ticket, which offers admission to the event and dinner from Neto’s catering.

The event will take place on Apr. 28 at Wood’s Furniture, located at 4918 Taylor Court.

Appetizers and drinks kick off the event at 5:30 p.m. and the program and dinner begin at 7 p.m.

The event acts as a fundraiser for TEF, allowing them to put money toward their classroom grants. Every year they donate approximately $15,000 directly into classrooms from the classroom grant program.

Tickets can be purchased online at http://turlockedfoundation.org/ironchef or at Pitman High School, Turlock High School, or Woods Furniture.

Woods Furniture will have tickets at their showroom until Friday at 12 p.m.