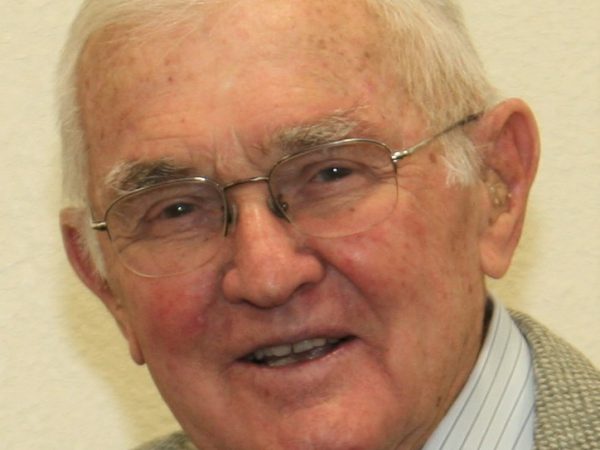 Gene was born in Piqua, Ohio, to parents Ernest and Fairy Palsgrove. When Gene was three, the family moved to Troy, Ohio, which was home throughout grade school and high school. He attended Manchester College in Indiana where he met Lenore Butterbaugh. They were married June 1, 1946. After graduating from college in 1948, Gene and Lenore accepted an assignment from the Church of the Brethren directing the Community Rehabilitation Project in South Modesto. They were active members of the Modesto Church of the Brethren where Gene directed the choir for 25 years. Lenore died in January 2010. Gene and Lenore celebrated 63 years of marriage.

In February 2011, Gene and long-time friend and neighbor, Mary Baucher, were married. The Palsgrove and Baucher families had been close for many years.

In 1985, Gene was part of a group of 25 Americans who traveled to Khmelnitsky, Ukraine, to initiate contact and develop a peace-oriented relationship between the Soviet Union and the United States. In 1987, Gene and Lenore returned to Khmelnitsky where a formal sister city agreement was signed. Gene and Lenore hosted numerous international guests in their home promoting global understanding and friendships.

Gene was an ad hoc member of the Martin Luther King Jr Commemoration Committee. Gene and Mary were awarded the 2019 MLK Legacy Award for their help in founding the Modesto Peace/Life Center. Gene was also involved with the Community Rehabilitation Project, Interfaith Ministries food bank, and Modesto Sister Cities program. Mary worked with Friends Outside and the Bereaved Parent Support Group.

Gene had a special appreciation for his family and made every effort to gather frequently. He enjoyed being outdoors, jogging, bird watching, golf, tennis, hiking in Yosemite National Park and at Sonora Pass. One of his greatest pleasures was gardening, enjoying the fruits of his labor and sharing with family and friends. Gene loved music and played the guitar and harmonica.