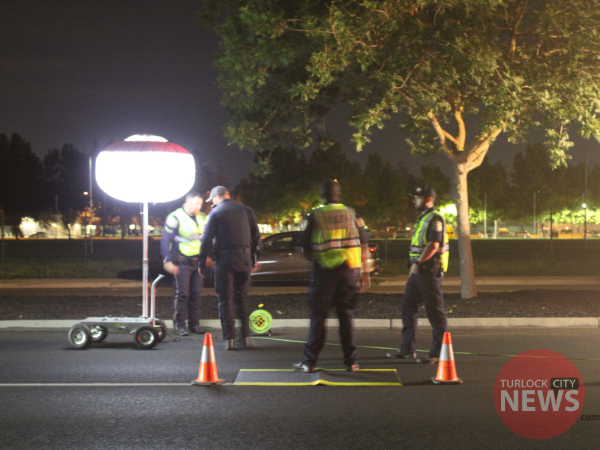 At about 10:00 pm Saturday night, the Turlock Police Department held a DUI and driver’s license checkpoint at the intersection of Geer Road and Fullerton Road, Turlock.

The checkpoint location was chosen based on a history of DUI collisions and arrests. The primary purpose of checkpoints is not to make arrests, but to promote public safety by deterring drivers from driving iimpaired.

During the checkpoint, officers looked for signs that drivers are under the influence of alcohol and/or drugs.

“The safety of our community is and always will be our mission,” said Sergeant David Hall. “We are looking for impaired drivers because driving under the influence is dangerous and puts others on the road at risk.”

The Turlock Police Department reminds the public that impaired driving is not just from alcohol. Some prescription and over-the-counter drugs may also interfere with driving. Always follow directions for use and read warning labels about driving or “operating heavy machinery”, which includes driving a vehicle. While medicinal and recreational marijuana are legal, driving under the influence of them is not.

If you plan on drinking or taking medications that may impact your ability to drive safely, plan on staying at home.

Drivers charged with a first-time DUI face an average of $13,500 in fines and penalties, as well as a suspended license.

Funding for the checkpoint was provided by a grant from the California Office of Traffic Safety, through the National Highway Traffic Safety Administration.

The checkpoint lasted about three hours, and three arrests were made.

A 17-year old male juvenile was arrested and released on a citation on charges of driving without a license.

Shante Angus, 25, of Turlock, was arrested and booked into the Stanislaus County Public Safety Center on charges of driving with a suspended license, as well as several warrants, one of which was for a felony.

Rosa Rodriguez, 52, of Turlock, was arrested and released on a citation on charges of driving without a license.

All three people who were arrested were given the opportunity to call someone to take their vehicle, which they did.