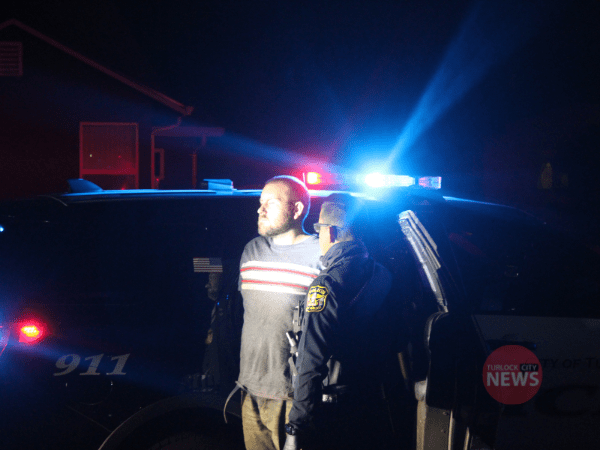 At about 6:36 pm Tuesday evening, the Turlock Police Department was dispatched to a reported larceny in progress near the intersection of Winter Haven Drive and Telluride Lane, Turlock. The caller reported that two male subjects in a white Chevrolet van had just stolen a catalytic converter off of a vehicle and that he was following them southbound on State Route 99 from West Monte Vista Avenue.

As an officer was en route to try to intercept the van from the south end of town, the caller lost sight of it as it recklessly weaved through traffic in an attempt to escape, however, the officer on-viewed a matching van exit State Route 99 at West Main Street and go eastbound. The officer got behind it as it approached North Soderquist Road and made a traffic stop on it.

The officer made contact with two subjects in the van, later identified as Curtis Gorman, 31, of Atwater, and Douglas Means, 29, of Merced, and detained them in handcuffs to further investigate given the surrounding circumstances.

The witness and the victim were both called to the scene of the stop and the witness was asked if the two subjects who were detained were who he saw stealing the catalytic converter. The witness confirmed that they were and the victim stated that he wanted them prosecuted.

Both subjects were arrested and the van was searched incident to arrest. The victim’s catalytic converter was found in the van along with burglary tools and random license plates belonging to other vehicles.

After the subjects were informed that they were being arrested, one of them claimed to be having a medical episode. The Turlock Fire Department and American Medical Response were dispatched to the scene, however, upon their arrival, the patient refused to be transported to the hospital.

The van was towed away from the scene.