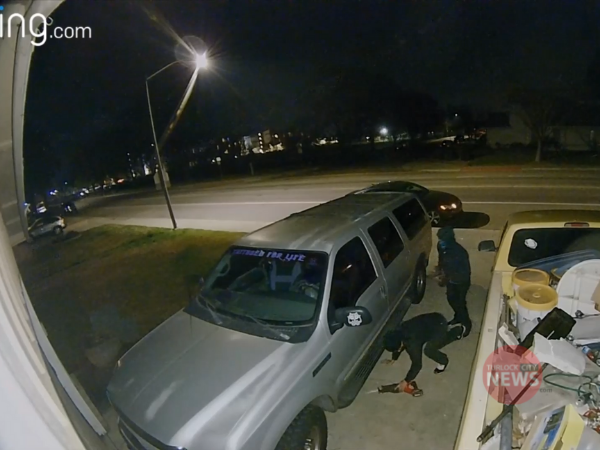 The first call came in at 9:31 pm in the 2800 block of Crowell Road, Turlock, reporting that two male subjects in a black sedan attempted to steal the catalytic converter off of one of the victim’s vehicles. Ring surveillance camera footage shows the pair crawling underneath the victim’s silver Ford pickup truck with power tools. You can then hear them trying to cut it off, before the victim interrupts them and they flee back to their vehicle. The attempted larceny was immediately reported to the Turlock Police Department and officers arrived in the area within two minutes of the call. Officers checked the area but were unable to locate the suspects.

Just three minutes later at 9:34 pm, the second call came in at Walnut Woods Apartments, 275 East Minnesota Avenue, reporting that a male subject wearing a red and black hat in a silver Cadillac or Chrysler sedan attempted to steal the catalytic converter off of the victim’s vehicle. He too was interrupted by the victim and fled the scene in his vehicle. Officers were unable to immediately respond and check the area because they were tied up on other calls, including the previous larceny attempt.

At 9:43 pm, a third call came in in the 1000 block of Whispering Pines Drive. The suspect attempted to steal the catalytic converter off of the victim’s vehicle. He was interrupted by the victim and fled the scene in his vehicle. Officers were unable to immediately respond. The suspect description and suspect vehicle description in this attempt matched that of the previous one at Walnut Woods Apartments. The two are believed to be related.

At 9:56 pm, a fourth call came in in the 500 block of Lewis Street. This attempt was actually successful. Three suspects, a female and two males, stole the catalytic converter off of the victim’s vehicle. They then fled the scene in their dark blue Lexus sedan with black rims and squeaky brakes. The female was driving. Officers immediately responded and checked the area, but were unable to locate the suspects.

The calls stopped coming in at night, however, at 10:25 am Friday morning, a call came in in the 1400 block of Vierra Way reporting a successful catalytic converter larceny that occurred overnight. No suspect information was available.

It is currently unclear whether the five attempts are all linked together somehow or if it’s all just coincidental, however, the two with the same suspect description and suspect vehicle description are believed to be related.

The investigations remain on-going. Anyone with information that could assist in the investigations is encouraged to call the Turlock Police Department’s tip line at 209-668-5550 extension 6780.