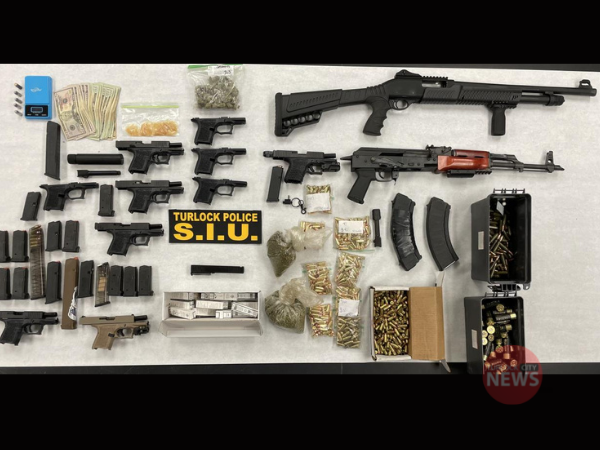 At about 3:21 pm Saturday afternoon, members of the Turlock Police Department’s Special Investigations Unit (SIU) arrested Noel Nazar, 20, of Turlock, in the 2900 block of Crowell Road, Turlock, after a months-long investigation into firearm trafficking.

No information about the investigation was released, however, the service of a search warrant at Nazar’s residence in the 2700 block of Meadowbrook Lane led to the discovery of six manufactured and fully assembled ghost guns, four manufactured but not assembled ghost guns, an assault rifle, an additional firearm, illegal firearm paraphernalia, illegal narcotics, a large amount of ammunition, over one thousand dollars in cash, and a scale.

A ghost gun is a firearm that is self manufactured that does not have a serial number and has not been legally registered.

“We want to thank our federal partners with the Central Valley Gang Impact Task Force for their continued support with these complex investigations,” said SIU Officer Jake Young. “This type of illegal firearm manufacturing operation poses a clear danger to our community. Our police department is working very hard to keep these firearms off our streets and out of the hands of criminals,” he continued.