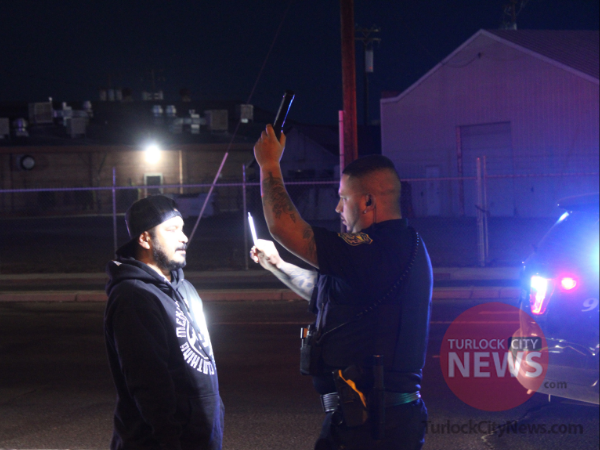 At about 8:23 pm Sunday night, the Turlock Police Department was dispatched to a reported hit and run with no injuries at the intersection of Flower Street and Grant Avenue, Turlock.

As officers were responding, they received a call reporting that the suspect vehicle from the hit and run had been involved in another collision at the intersection of Lander Avenue and South Avenue.

Officers diverted to the second collision because the possible suspect and his vehicle were still there.

When officers arrived, they found a total of three vehicles involved. One was a gray Chevrolet SUV, one was a black Toyota sedan, and the other was a white Chevrolet pickup truck.

The gray Chevrolet SUV was the suspect vehicle in the hit and run and was only occupied by its driver, Albert Ramirez, 35, of Turlock. He did not suffer any injuries. The black Toyota sedan was occupied by a male adult driver and a female adult passenger. The female passenger suffered minor injuries but refused to be transported to the hospital. The white Chevrolet pickup truck was occupied by a female adult driver and a male juvenile passenger. Neither of them suffered any injuries.

Officers noticed that Ramirez was exhibiting signs of being under the influence, so they asked him to participate in standardized field sobriety tests. Ramirez participated in one, but refused to participate in the other two. Based on Ramirez’s performance on the one test, other factors, and the totality of the circumstances, officers determined that Ramirez was indeed under the influence of alcohol.

The black Chevrolet SUV and black Toyota sedan sustained moderate damage and were deemed inoperable as a result of the collision, requiring them to be towed away. The white Chevrolet pickup truck sustained minor damage and was able to be driven away from the scene.

It is currently unknown how the collision happened.

Another officer went back to the original scene and found a gray Hyundai sedan that had been struck by Ramirez’s gray Chevrolet SUV. The gray Hyundai sedan had an unknown number of occupants that suffered unknown injuries. It sustained minor damage and was deemed inoperable as a result of the collision, requiring it to be towed away. It is currently unknown how that collision happened.

No witnesses were available to identify Ramirez as the driver in the original collision.

Ramirez was arrested and booked into the Stanislaus County Public Safety Center on charges of driving under the influence of alcohol causing injury.