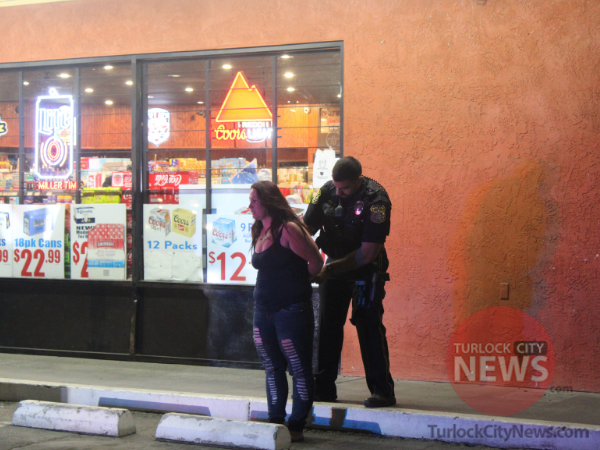 At about 10:34 pm Monday night, a Turlock Police officer near Liquor Club, 1590 Lander Avenue, Turlock, observed a vehicle violate the California Vehicle Code, so he made a traffic stop on it.

The officer made contact with the vehicle’s driver, Danielle Anderson, 30, of Turlock, and noticed that she was exhibiting signs of being under the influence, so he removed her from the vehicle and asked her to participate in standardized field sobriety tests, which she agreed to. After the standardized field sobriety tests, Anderson was asked to blow into a preliminary alcohol screening device, which she also agreed to.

Based on her performance on the tests, her statements, and the totality of the circumstances, the officer determined that Anderson was under the influence of both alcohol and drugs.

It was also discovered that Anderson had originally given someone else’s name. When she admitted to it and gave her actual name, the officer had his dispatcher run her. She returned with five different warrants for a variety of felony and misdemeanor charges including child endangerment, possession of a stolen vehicle, escape from custody, possession of drug paraphernalia, failure to appear on a misdemeanor, driving without a valid driver’s license, driving under the influence of drugs, providing false identification to a peace officer, and driving with a suspended driver’s license due to a DUI conviction.

While another officer was speaking with three other occupants in the vehicle, he noticed a firearm on the rear seat. All three were removed from the vehicle and two who both had access to the firearm were put in handcuffs.

The two who had access to the firearm were identified as Christopher Lopez, 45, and Juan Ocampo, 28, both of Merced.

Ocampo originally provided a fake name several times, however, his true identity was eventually discovered. Both Lopez and Ocampo were run. Lopez returned with an infraction warrant for a Fish and Game Code violation, while Ocampo returned clear.

Both Lopez and Ocampo were questioned about the firearm, however, did not want to own up or rat each other out.

Anderson, Lopez, and Ocampo were all arrested and booked into the Stanislaus County Public Safety Center, Anderson on charges of driving under the influence of alcohol and driving under the combined influence of alcohol and drugs, and her warrants, Lopez on charges of possession of a firearm by a convicted felon, carrying a loaded firearm, and possession of methamphetamines, and his warrant, and Ocampo on charges of carrying a loaded firearm and providing false identification to a peace officer.

The fourth and final occupant of the vehicle was released without any charges.