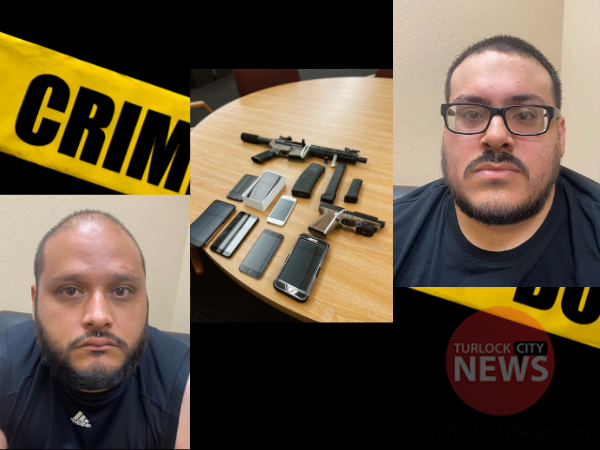 Detectives were following up on a cyber tip they had received from the National Center for Missing and Exploited Children. The tip was investigated by high tech crimes detectives which led them to Alviso’s apartment. A search warrant was obtained for the apartment and it was served.

During the service of the warrant, detectives found illegal firearms and narcotics. Electronic devices were also found which were seized as evidence for forensic analysis. Alviso was taken to the Turlock Police Department for questioning and then booked into the Stanislaus County Public Safety Center on charges of possession of a controlled substance while armed, possession of ammunition by a prohibited person, possession of a short-barrelled rifle or shotgun, possession of a firearm by a convicted felon or person addicted to a narcotic, possession of an undetectable firearm, and child abuse or endangerment under circumstances other than those likely to produce great bodily harm or death.

Depending on the results of the forensic analysis of his seized electronic devices, he may face additional charges based on the original cyber tip.

A few hours later, at 11:30 am, detectives arrested Alfredo Villasenor-Santana, 32, of Turlock, at his home in the 800 block of S Minaret Ave after the service of an additional search warrant.

Detectives were following up on an additional cyber tip which was also investigated by a high tech crimes detective. It led them to Villasenor-Santana’s home. A search warrant was obtained for the home and it was served.

During the service of the warrant, detectives found electronic devices which contained child pornography. Villasenor-Santana was taken to the Turlock Police Department for questioning and then booked into the Stanislaus County Public Safety Center on charges of distributing child pornography, possession of child pornography, secretly photographing or recording a person in a state of full or partial undress, and an unrelated felony warrant out of Fresno County for domestic violence related charges.

One local victim was identified in Villasenor-Santana’s case. They are currently safe with family members.

“We work hard and continue to find new ways to locate and identify these criminals,” Detective Tim Redd said. “Our efforts are to keep these children safe and stop child exploitation in our local community and other communities throughout the nation,” he continued.