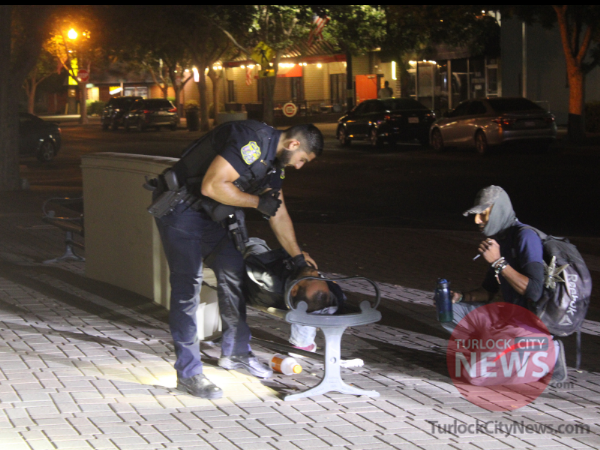 At about 10:29 pm Wednesday night, the Turlock Police Department, Turlock Fire Department, and American Medical Response were dispatched to a medical aid at Swanson-Centennial Park, 2101 Pinto Way, Turlock, for a subject overdosing on fentanyl at the picnic tables of the park.

Police were the first to arrive and they found the patient unconscious. They administered three doses of Narcan, which eventually made the patient come to prior to firefighters’ and paramedics’ arrival.

Just nine minutes later, at 10:38 pm, the Turlock Police Department was dispatched to a security check in front of La Mo Cafe, 310 East Main Street, for a subject passed out on a bench with another subject giving him sternum rubs trying to wake him up.

The patients from both calls were ground transported by American Medical Response to local hospitals. They are expected to make full recoveries.

Opioid overdoses have increased over the past couple years and typically there’s at least one that occurs in Turlock every day.

Police officers are dispatched to all overdoses as they are already out in the field and typically arrive much quicker than fire and medical personnel, especially at night when firefighters are asleep at their station. All Turlock Police patrol vehicles are required to have a minimum of two Narcan doses before being put into service at the beginning of each shift. If at any point during the shift there’s less than two remaining in the patrol vehicle, officers are required to stop by the station and stock up as soon as practical.

Narcan, which contains Naloxone, is an extremely effective and fast opioid reversing agent that can make an opioid overdose victim come to within minutes. Those who are given Narcan should still be taken to the hospital to be treated immediately, as Narcan only stays in the system for a limited amount of time, much less than the actual opioids. If not treated at a hospital by the time the Narcan runs out, the patient could go back into an overdose and can die.

Fentanyl is the most common opioid which causes these overdose. Fentanyl is a synthetic opioid typically used to treat patients with chronic severe pain or severe pain after a surgery. It acts similar to morphine, however, is about one hundred times more potent. It’s so potent that one kilogram of it has the ability to kill 500,000 people and one backpack full of it has the ability to kill everyone in the State of California plus more.

Illicit fentanyl is typically manufactured in foreign countries and is smuggled into the United States through Mexico to be sold on the illegal drug market.

Sometimes, fentanyl in mixed in with other drugs on the illegal drug market to increase their potency. People aren’t told this and sometimes overdose on it without even knowing that they’re specifically taking it.

If you know or suspect that someone is selling fentanyl, please call the Turlock Police Department’s Special Investigations Unit at 209-668-5550 extension 6780. You could save lives.