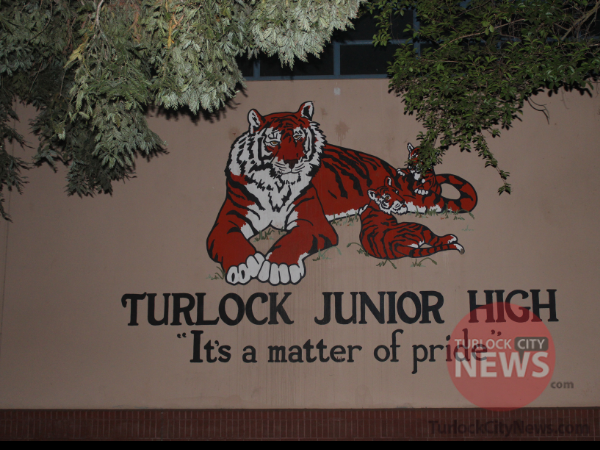 While officers were responding, they were notified that a keyholder was responding with an estimated time of arrival of five minutes.

Officers arrived on scene and found that the keyholder was already waiting for them in the parking lot. The keyholder allowed them access into the office where they came across a 17-year old white male juvenile who was burglarizing it.

The juvenile was identified and he turned out to be on probation for unknown charges and had a felony violation of probation warrant. He was arrested and booked into Stanislaus County Juvenile Hall on charges of burglary.

TurlockCityNews.com is aware of a previous burglary at the junior high which occurred between the late night hours of Tuesday, May 17th, and the early morning hours of Wednesday, May 18th. The suspects from that burglary appeared to be older high school aged juveniles. The Turlock Police Department has not yet made a statement as to whether the suspect from today’s burglary is related to that one.

A few hours later, at 7:07 am, an officer was dispatched to a found property at Walnut Elementary Education Center, 4219 North Walnut Road, after a custodian had discovered a backpack style purse near a trash enclosure which contained an unloaded handgun.

The officer responding to this call was aware of the burglary that had occurred at the junior high just a few hours ago which is just two blocks away from where the purse and gun were found. He checked the belongings of the suspect from that incident and came across evidence which led him to a business that the suspect had recently been at. The officer went to that business and checked surveillance camera video, which showed the suspect to be in possession of the distinctive purse that contained the gun.

The gun is believed to have been stolen from a nearby residence recently. Detectives are actively investigating the many aspects of this case and will be following up on leads. Additional information will be made available at a later time.

“The safety of our children is paramount for our officers,” said Turlock Police Chief Jason Hedden. “They left no stone unturned to quickly come to a resolution. It appears the gun found on the school grounds was fruits of an earlier burglary and had nothing to do with school nor does it appear the suspect had any intent to use it at the school,” he continued.