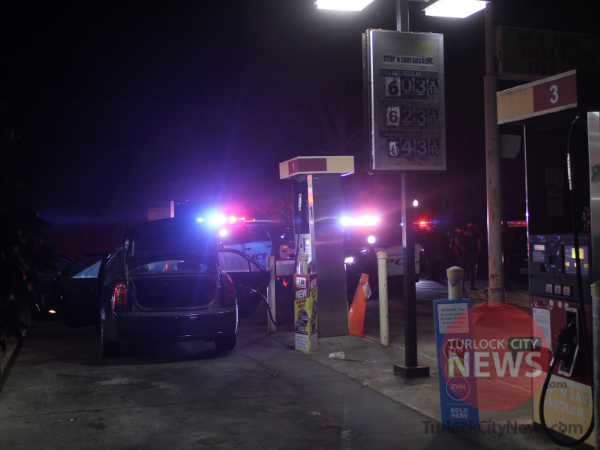 At about 11:31 pm Thursday night, the Turlock Police Department was dispatched to a reported robbery that had just occurred at Safeway, 3051 Countryside Drive, Turlock.

An officer made contact with the victim at a location different from where the crime occurred, where he was standing by. The victim reported that as he walked out of Safeway, he was surrounded by four male subjects in the parking lot. One of them, later identified as Ethan Culwell-Helton, 19, of Turlock, lifted his t-shirt in a movement the victim believed was to indicate that he had a handgun concealed on him. Culwell-Helton demanded money from the victim and then struck him in the face with an open hand. The victim removed his wallet and another male, later identified as a 17-year old juvenile male of Turlock, took cash from the victim’s hand.

All of the subjects then got into a black Cadillac sedan and fled the scene, however, before doing so, the victim was able to get a license plate number.

The vehicle’s description and license plate number was aired over the police radio, and an uninvolved subject who was listening to the police scanner heard it. That subject saw the vehicle parked in the driveway of a residence in the 1200 block of Windsor Court. He quickly flagged down an officer who was around the corner and alerted him of his findings.

Members of the Turlock Police Department’s Special Investigations Unit, who were on-duty working proactive patrol at the time, began a stakeout on the vehicle using an unmarked vehicle close up and several marked vehicles hiding nearby.

Eventually, five subjects were seen exiting the residence, which included the four who had surrounded the victim. All five got into the vehicle and left the residence.

Officers attempted to follow the vehicle, but lost it for a short period of time before one of them eventually found it again about five minutes later pumping gas at Stop N Save Liquors, 825 East Main Street.

Officers and a police canine converged on the vehicle and conducted a high risk stop, detaining all subjects in handcuffs at gunpoint for further investigation.

The victim and a witness who was with him at the time of the crime arrived at the stop and were each individually asked to identify the two subjects that actually actively took part in the robbery. Both identified Culwell-Helton and the 17-year old juvenile male.

The other three subjects who were detained were released.