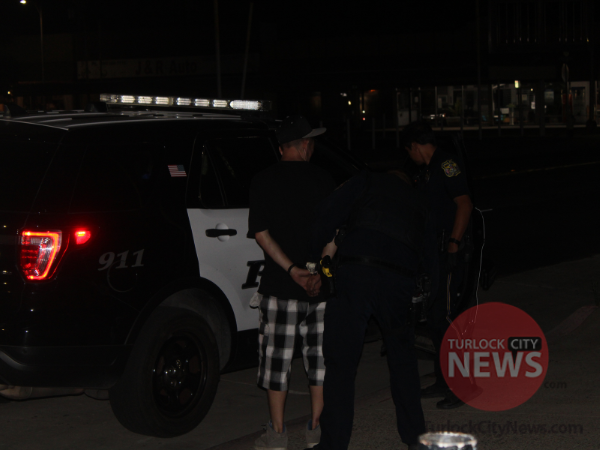 At about 10:13 pm Wednesday night, a Turlock Police officer near the intersection of Spruce Street and High Street, Turlock, observed a subject randomly jump out of a vehicle and begin running, so he made contact with him.

The officer identified the subject as Alexander Stokes, 30, of Valley Springs, and had his dispatcher run him. He returned with a felony warrant for joyriding.

Stokes was arrested and booked into the Stanislaus County Public Safety Center on his warrant.

About forty minutes later at 10:51 pm, another Turlock Police officer near the intersection of South Golden State Boulevard and Marshall Street observed Scott Tackett, 30, of Turlock, driving a U-Haul truck. The officer recognized Tackett and knew he had at least one felony warrant, so he made a traffic stop on him.

The officer made contact with Tackett and his passenger, Joslin Chadwick, 26, of Turlock, and had his dispatcher run both of them. Sure enough, Tackett returned with several felony and misdemeanor warrants for organized retail theft, possession of burglary tools, grand theft, shoplifting, making criminal threats, petty theft, and driving with a suspended driver’s license due to a DUI conviction. Additionally, Joslin returned with a felony warrant for grand theft and shoplifting as well as a misdemeanor warrant for trespassing into a dwelling.

Both Tackett and Chadwick were arrested and booked into the Stanislaus County Public Safety Center on their warrants.

About ten minutes later at 11:03 pm, the same Turlock Police officer from the first warrant arrest near the intersection of West Main Street and West Avenue North observed a vehicle violate the California Vehicle Code, so he made a traffic stop on it.

The officer made contact with the vehicle’s driver and his passenger, identified as Martin Marroquin, 34, of Turlock, and had his dispatcher run him. Both returned clear, however, Marroquin was on post release community supervision for weapon related charges and as a part of his terms, can be searched by any peace officer at any time without probable cause or a warrant. A search was conducted which led to the discovery of narcotics and paraphernalia.

Marroquin was arrested and released on a citation on charges of possession of a controlled substance and possession of drug paraphernalia.

Both the officers involved in these arrests are known for being extremely proactive and try to make as many arrests as they can throughout their shift by constantly making stops and looking for those who are up to no good.