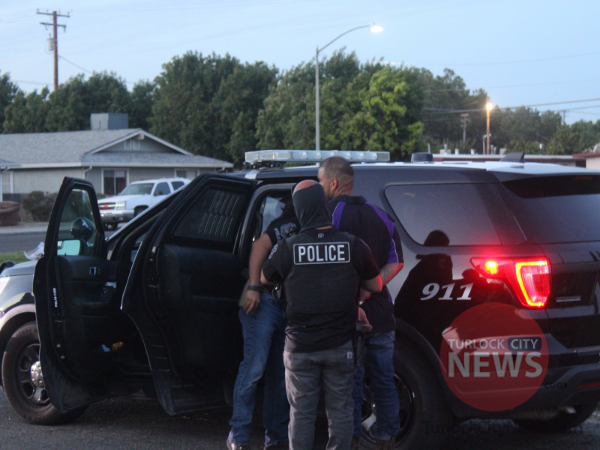 At about 7:21 pm Thursday evening, the Turlock Police Department was dispatched to a reported armed robbery that had just occurred at Broadway Park, 501 North Broadway, Turlock, after a man had just approached another man, held him at gunpoint, and taken his vehicle.

Officers immediately began searching the area for the vehicle, a gray Ford SUV, and came across it in the 1200 block of Magic Sands Way. Standing next to it was a subject later identified as William Kealeni Castillo, 40, of Turlock. When Castillo noticed officers, he immediately began fleeing from them northbound on foot, going through backyards and jumping over a barbed wire fence.

After Castillo jumped the barbed wire fence, he was met by a sergeant who was waiting for him. Castillo surrendered and was arrested, all within about ten minutes of the call coming in.

Castillo suffered minor injuries after being cut by the barbed wire fence. He refused to be transported to the hospital.

Castillo was determined to have several warrants, some felony, out of Turlock, Modesto, Stanislaus County, and San Francisco for charges including burglary, joy riding, possession of a stolen vehicle, domestic violence causing corporal injury, and petty theft.

The victim was brought to Castillo and asked if that was who had carjacked him, which he confirmed.

It should also be noted that Castillo was wearing a FedEx uniform shirt when he was arrested. We have reached out to FedEx to see if he is or has ever been employed by them and are yet to hear back.

Castillo was booked into the Stanislaus County Public Safety Center on charges of carjacking, possession of a firearm by a convicted felon or person addicted to a narcotic, possession of ammunition by a prohibited person, resisting a peace officer, and possession of methamphetamines.

The stolen vehicle was returned back to its rightful owner not wrecked, stripped, or burned.